1. Mention the important considerations required while fabricating a p-n junction diode to be used as a Light Emitting Diode (LED). What should be the order of band gap of an LED if it is required to emit light in the visible range?
Answer : (i) The semiconductors used for fabrication of visible LEDs must have a band gap from 1.8 eV to 3 eV.
(ii) Both p-type and n-type semiconductor are heavily doped.
(iii) It should be encapsulated with a transparent material.
For emitting light in visible range the band gap should be from 1.8 eV to 3 eV.

Energy of each photon,

3. Distinguish between intrinsic and extrinsic semiconductors on the basis of energy band diagram.
Answer :

4. Radiations of frequency v1 and v2 are made to fall in turn, on a photosensitive surface. The stopping potentials required for stopping the most energetic photoelectrons in the two cases are V1 and V2 respectively. Obtain a formula for determining the threshold frequency in terms of these parameters.
Answer : If v0 is the threshold frequency, then from photoelectric equation, we have

5. Two material bars A and B of equal area of cross-section, are connected in series to a DC supply. A is made of usual resistance wire and B of an n-type semiconductor.
(a) In which bar is drift speed of free electrons greater?
(b) If the same constant current continues to flow for a long time, how will the voltage drop across A and B be affected?
Justify each answer.
Answer : (a) Drift speed in B (n-type semiconductor) is higher
Reason: I = neAvd is same for both
n is much lower in semiconductors.
(b) Voltage drop across A will increase as the resistance of A increases with increase in temperature.
Voltage drop across B will decrease as resistance of B will decrease with increase in temperature.

6. Calculate and compare the energy released by
(a) fusion of 1 kg of hydrogen deep within the sun and
(b) the fission of 1 kg of 235U in a fission reactor.
Answer : (a) In sun 4 hydrogen nuclei combine to form a helium nucleus and 26 MeV of energy is released (Img 8)

9. How is a wavefront defined? Using Huygen’s construction draw a figure showing the propagation of a plane wave reflecting at the interface of the two media. Show that the angle of incidence is equal to angle of reflection.
Answer : Consider a plane wavefront AB reflected at the interface of the two media. When the wavefront strikes the reflected surface at point B the secondary wavelets travel back into the some medium.
During the time the disturbance from A reach the point C, the secondary wavelets from B have spread over a hemisphere of radius BD = vt. Where v in the speed of the wave and t is the time taken from the wave to reach from A to C. (Img 9)
Also AC = vt
The tangent plane CD is the new reflected wavefront.
Let i and r be the angle of incidence and angle of reflection
respectively.
∠ABC = ∠i, ∠BCD = ∠r

11. Identify the following electromagnetic radiation as per the wavelength given below:
(a) 10– 4 nm (b) 10–3 m (c) 1 nm.
Write one application of each.
Answer : (a) 10– 4 nm → gamma radiation
Application : Radio therapy or to initiate nuclear reactions.
(b) 10–3 m → microwaves
Application : in RADAR for aircraft navigation, microwave cooking (oven).
(c) 1 nm → X-rays
Application : In medical science for detection of fractures in bones.

Based on the above facts, answer the following questions: 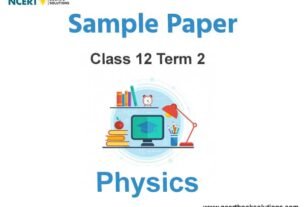