PART – I (30 marks)
Attempt all questions from this Part

(b) Give the six figure grid reference for the surveyed tree North East of Bamba settlement.
Answer : Bamba- 195146

(f) What evidence from the map shows that the region receives seasonal rainfall?
Answer : The evidences are the presence of broken ground, lined perennial wells and seasonal streams.

(g) What is the main occupation of the people of the region in the map extract? Give reasons for your answer.
Answer : The main occupation is agriculture. The presence of lined perennial well and yellow cultivable land gives evidence.

(h) Give a reason for each of the following :
(i) Disappearing streams in grid square 2018.
(ii) Broken ground along the banks of River Sipu.
Answer : cultivable land gives evidence.
(h) (i) It is because of scanty rainfall and high temperature due to which water is evaporated.
(ii) Due to soil erosion when flood occurs during monsoon.

(d) Study the climatic data given below and answer the questions that follow:  (Image)
(i) Calculate the annual range of temperature.
(ii) Calculate the total rainfall during the monsoon season.
(iii) On which coast does the station lie? Give a reason to justify your answer.
Answer : (i) Annual Range of Temperature : 33.1°C –23.1°C = 10.0°C
(ii) Total rainfall = 114.3 cm.
(iii) Station lies on the Eastern Coast because it receives good amount of rain in the winter months of October-December.

4. (a) Give two points of difference between Black and Alluvial Soil.
Answer : (Image)

(b) Name the process by which Laterite Soil is formed. Give a reason as to why the soil is not suitable for agriculture.
Answer : (b) Laterite soil is formed in-situ as a result of leaching under typical monsoonal conditions with high temperature and heavy rainfall with alternating wet and dry spells.

(c) (i) What is meant by soil conservation?
(ii) Mention two measures to conserve soil in the hilly terrain.
Answer : (i) Soil Conservation is the effort made by man to prevent soil loss from erosion or reduced fertility caused by over usage.
(ii) (1) Contour Ploughing
(2) Terrace Farming

(d) Give a geographical reason for each of the following :
(i) Khadar is more fertile than Bangar.
(ii) Red soil is acidic in nature.
(iii) The foothills of the Himalayas are prone to excessive soil erosion.
Answer : (i) Khadar is composed of newer alluvium deposits and is fertile as it is formed of fine silt and clay.
(ii) Red soil is acidic in nature because due to deficiency of lime, nitrogen, phosphorous and humus in the soil.
(iii) It is due to deforestation, floods and uncontrolled grazing of animals.

(b) Mention two benefits of forests.
Answer : (i) The trees absorb the carbon dioxide and releases oxygen which is used by human beings and animals.
(ii) The trees also help in regulating the water cycle.
(iii) Forests also provide essential products like oils seeds, edible plants, fibres, etc.
(iv) The roots of trees in the forest bind the soil firmly which prevents soil erosion.

(c) (i) State any two characteristics of Tidal forests.
(ii) Name an area where Tidal forests are found.
Answer : (i) The main characteristics of Tidal forests are-
1. These forests are dense, evergreen and of varying heights.
2. The trees have long roots submerged under water and have pores which help them to breathe during high tide.
3. The tidal tree yields hardwood which is strong and durable and is used for making boats and boxes.
4. The most important tree is the Sundari tree in the Ganga Delta from which the word Sunderbans is coined.
5. The Indian tidal or mangrove forests are considered as the largest mangrove forest in the world. (Any two points)
(ii) The Tidal forests are found in the saline swamps of Sunderbans in West Bengal.

6. (a) Give two reasons why well irrigation is popular in North India.
Answer : 1. The soil in North India is soft.
2. It is easy to dig well due to flat level land.

(b) Mention two disadvantages of tank irrigation.
Answer : Two disadvantages of tank irrigation :
(i) In the absence of rainwater during dry season, the tanks become dry and fail to provide water for irrigation.
(ii) Due to deposition of sediments, the tanks get silted up soon and desilting is necessary for making irrigation suitable which is expensive.
(iii) Tanks occupy large fertile areas which otherwise could be used for agricultural purposes.

(d) Give a reason for each of the following :
(i) Inundation canals are being converted into perennial canals.
(ii) Ground water reserves are depleting at a fast rate.
(iii) Drip irrigation reduces loss of water through evaporation.
Answer : (i) 1. Inundation canal provide water only during rainy season.
2. They are solely dependent on rainfall and irrigate higher regions.
(ii) It is so due to lowering of the water table, reduction of water in streams and lakes, deterioration of water quality and pumping groundwater.
(iii) Drip irrigation reduces loss of water through evaporation because it supplies the water to the roots of the plants slowly through pipes, valves and tubing.

(b) With reference to the Bhakra Nangal Dam,answer the following:
(i) Name the river on which it has been constructed.
(ii) Name two states that benefit from this project.
Answer : (i) On river Satluj.
(ii) Punjab, Haryana and Rajasthan benefits from this project.

(d) (i) Name two types of Iron ore mined in India.
(ii) State two uses of copper.
Answer : (i) Haematite and Magnetite are mined in India.
(ii) Uses of Copper :
1. Since copper is a good conductor of electricity, it is used for making electric wires.
2. It is used in automobiles and in defence industries.
3. It is alloyed with nickel and iron to make stainless steel.

8. (a) Mention two problems of Indian Agriculture.
Answer : (a) Problems of Agriculture in India :
(i) Lack of adequate irrigation facilities and dependence on monsoon.
(ii) The land holdings are uneconomic due to their small size and as such the yields are low.
(iii) Agriculture is becoming mechanized and requires huge capital investments to purchase machineries, fertilizers, pesticides and high yielding variety seeds. The Indian farmers are poor to buy all these materials.
(iv) A majority of Indian farmers are still dependent on the primitive and poor techniques of producing crops.

(b) Give two differences between intensive and extensive farming.
Answer : (Image)

9. (a) With reference to the Bhilai Iron and Steel Plant :
(i) Name its foreign collaborator.
(ii) State the source from where it obtains iron ore and coal.
Answer : (a) (i) Bhilai Iron and Steel Plant is collaborated with erstwhile USSR.
(ii) The plant obtains its-
1. Iron Ore from Dalli Rajhara mines.
2. Coal is obtained from Bokaro, Kargati and Jharia fields in Jharkhand and Korba in Chhattisgarh.

(b) Give two reasons why the cotton textile industry has developed in Mumbai.
Answer : (i) Regular supply or proximity to raw material.
(ii) Favourable climatic conditions specially the humid climate.
(iii) Good network of road and rail transportation within the country and sea routes for the international market.
(iv) Location of major ports facilitates the export and import facilities.
(v) Availability of cheap and skilled labours.
(vi) Mumbai is a centre of financial and commercial resources.
(vii) Electricity is supplied by the Tata Hydroelectricity system in the Western Ghats to Mumbai.

(c) (i) Mention two advantages of setting up a small scale industry.
(ii) What is the difference between a public sector and a private sector industry?
Answer :

10. (a) Transport is the backbone of a country’s economy. Give two reasons to support the statement.
Answer : (i) Transportation facilitates utilisation of natural resources lying unutilized in the hills, forests and mines.
(ii) It helps in the process of industrialization and urbanisation.

(b) Give two reasons why airways are used extensively despite being an expensive mode of transport.
Answer : (i) Air transport is the fastest and most comfortable mode of transport.
(ii) It can easily reach to remote and inaccessible areas like mountains, forests, deserts etc.

(d) State three advantages of roadways over railways.
Answer : (i) Roadways are ideal for short distances as through it every village and hamlet can be reached.
(ii) It is cost effective in comparison to other means of transport.
(iii) It transports people and goods quickly and easily.
(iv) It provides door-to-door services.

11. (a) Mention two reasons for the need of Waste Management.
Answer : Waste management is needed because :
(i) Improperly stored refuse can cause health, safety and economic problems.
(ii) Transmission of diseases due to accumulation of wastes is a major threat to people and environment.

(b) Define the terms :
(i) Composting
(ii) Open dumping
Answer : (i) Composting : It is a form of waste disposal where organic waste decomposes naturally under oxygen-rich conditions.
(ii) Open dumping : Waste materials which are dumped in open pits and become the breeding ground for mosquitoes, flies, insects, etc.

(c) (i) What is meant by waste?
(ii) Mention two sources of waste.
Answer : (i) Waste is unwanted and unused material which is rejected for any further usage.
(ii) Industrial waste, Radioactive wastes and Solid wastes are the sources of waste.

(d) (i) What is the meaning of the 3 R’s in waste management?
(ii) Give an example for each one of the above.
(iii) Mention any one way by which accumulation of waste can be hazardous for human health.
Answer : (i) The 3 R’s means to Reduce, Reuse and Recycle the wastes.
(ii) 1. Buying products with minimum packaging, borrowing things which are not used often, starting a compost bin, saving energy and water by turning them off when not required are some ways of reducing wastes.
2. Reusing many materials like glass, metal, plastics, cloths, paper, etc. that is used in our day to day life and by reusing old tyres and leathers for making chappals, shoes, water bags, etc.
3. Recycling Bagasse, a by-product of sugarcane, is used for manufacturing paper pulp, for making packaging material of dairy products.
(iii) When the accumulated waste decomposes, it produces large quantity of methane gas which is highly explosive, if not managed properly. 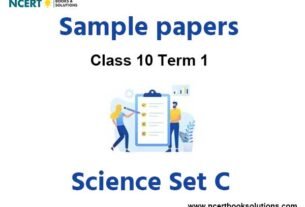