The writer describes the hill station of Coorg located in the Western Ghats in the state of Karnataka. It is located midway between Bangalore and Mangalore. The suitable time to visit Coors is from September to March. The place is famous for coffee plantations and spices. There are abundant rainforests which cover 30 percent of the area. The Corgi men are brave warriors who are permitted to keep firearms without a license due to their trustworthiness. The women of Coorg are pretty. Coorg is also known as Kodavu and the Kodavus, though are Hindus by religion but their customs differ from those of mainstream Hindus. They marry within their community. Kodavus are said to be of Greek or Arabic descent. Some soldiers of Alexander’s army settled there. Also, as the ethnic dress of the Kodavus, Kuppia is similar to the Arab garment Kuffia, it is said that maybe their ancestors were Arabs or Kurds. The river Kaveri originates from Coorg. The fish named Mahaseer is found in the river. Many animals and birds like kingfisher, langur, squirrels and elephants can be spotted along the river. Tourists relax in the serene atmosphere and also enjoy adventure sports like river rafting, canoeing, rappelling, mountain biking, rock climbing and trekking. While trekking on the nature trails, animals like Macaques, Malabar squirrels, langurs and slender loris can be spotted on the trees. The major tourist attractions are Brahmagiri hills, Nisargdham Island and Bylakuppe Tibetan settlements. Coorg gives visitors a feel of India’s diverse cultures.

Midway between Mysore and the coastal town of Mangalore sits a piece of heaven that must have drifted from the kingdom of God. This land of rolling hills is inhabited by a proud race of martial men, beautiful women and wild creatures. Coorg, or Kodagu, the smallest district of Karnataka, is home to evergreen rainforests, spices and coffee plantations.

Question. What is Coorg known for?
Ans. Coorg is known for its evergreen rainforests, spices and coffee plantations.

Question. Where is Coorg situated?
Ans. Coorg is situated between the midway of Mysore and the coastal town of Mangalore.

The fiercely independent people of Coorg are possibly of Greek or Arabic descent. As one story goes, a part of Alexander’s army moved south along the coast and settled here when return became impractical. These people married amongst the locals and their culture is apparent in the martial traditions, marriage and religious rites, which are distinct from the Hindu mainstream.

Question. Where can we find the culture of Coorg most apparently?
Ans. The Coorg people’s culture is most apparent in their martial traditions, religious rites and marriages.

Question. Which story is famous about the people of Coorg?
Ans. It is said that the people of coorg were the descendants of Alexander’s army who settled here when return became impractical.

Coorgi homes have a tradition of hospitality, and they are more than willing to recount numerous tales of valour related to their sons and fathers. The Coorg Regiment is one of the most decorated in the Indian Army, and the first Chief of the Indian Army, General Cariappa, was a Coorgi. Even now, Kodavus are the only people in India permitted to carry firearms without a license.

Question. What is the special favour granted only to them even now?
Ans. Kodavus are the only people in India permitted to carry firearms without a license.

The river, Kaveri, obtains its water from the hills and forests of Coorg. Mahaseer — a large freshwater fish — abound in these waters. Kingfishers dive for their catch, while squirrels and langurs drop partially eaten fruit for the mischief of ^enjoying the splash and the ripple effect in the clear water. Elephants enjoy being bathed and scrubbed in the river by their mahouts.

Question. Find the word in the extract which means same as ‘wave’.
Ans. ‘Ripple’ from the extract means ‘wave’.

Question. From whom have the inhabitants of Coorg descended, as per the legend?
Ans: As per the legend, a part of Alexander’s army, when retreating from India, went South and settled in Coorg when they found that they could not return home. Then they married among the locals and their descendants are the Kodavus. (the people of Coorg).

Question. Describe any two tourist places of Coorg.
Ans: The climb of Brahmagiri hills brings into a panoramic view of the entire misty landscape of Coorg. A walk across the rope bridge leads to the 64acre island of Nisargadhama.

Question. Describe Coorg’s weather. When is it most pleasant for the tourists to visit Coorg?
Ans: The weather of Coorg is pleasant during the months from September to March. During that time, the weather is perfect with some showers thrown in for good measure. During the monsoon, it receives heavy rainfall.

Question. The Coorgis are the descendants of the Greeks or the Arabs and are still are able to maintain their
traditional practices. Do you agree that following these practices today is important? Why or why not?
Ans: After reading the text, I feel that it is important to follow the traditional practices, as it has kept the tradition of Coorgis known to the people even today. If the people of Coorg had not followed it their tradition would have perished and nobody would have remembered them today because of their culture and traditional practices. According to the text, their traditions can be seen in the martial traditions, religious rites and marriages. The Kodavus even wear the dress which resembles Arabs. Traditional practices also play a very important role in maintaining values amongst people and have an impact on shaping the behaviour of people.

Question. How do Coorg’s location, people and natural features add to the diversity of India?
Ans: Coorg, or Kodagu, the smallest district of Karnataka, is home to evergreen rainforests, spices and coffee plantations. Evergreen rainforests cover thirty percent of this district. During the monsoons, it pours enough to keep many visitors away. The season of joy commences from September and continues till March. The weather is perfect, with some showers thrown in for good measure. The air breathes of invigorating coffee. Coffee estates and colonial bungalows stand tucked under tree canopies in prime corners. Coorg is beautifully located and described as a piece of heaven that must have drifted from the kingdom of God. It has rolling hillsides with a pollution free river and forests teeming with wildlife. Here nature exists in its pristine glory, which adds to the diversity of India. Further, it has coffee and spice plantations, quite different from the rest of India. The local people, the Kodavus, are a martial race. Of course, they are well known for their hospitality, just like all Indians. All these features of Coorg add to the diversity of our country 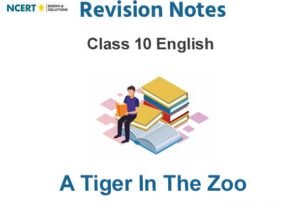 A Tiger in the Zoo Summary Class 10 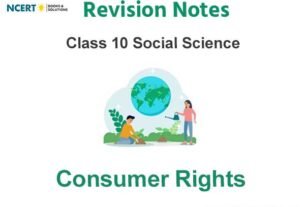