Class 11 Economics students should read and understand the important questions and answers provided below for Environment And Sustainable Development which will help them to understand all important and difficult topics.

Limitations:
(a)In areas that experience a lot of overcast or low light days, the output is not that good, though still considerable.
b) It is not available at night or when there is a dense cloud cover. This makes it unreliable.
c) solar power is currently significantly more expensive and requires action by consumers e.g., installing solar panels.

Wind Power:
Benefits:
(a) In high wind areas(at least 12 mph),wind generators produce power, more cost effectively than solar. Wind’s long-term technical potential is believed to be 5 times current global energy consumption or 40 times the current electricity demand.
(b) A moderate proportion of wind generation can be connected without the need for a storage. The cost of maintenance and storage is comparatively lower compared to any other source of energy-renewable or non-renewable.
(c) Power output from wind varies though it can be predicted with a fair degree of confidence many hours ahead.

Limitations:
(a) Repair(even under warranty)can be quite costly, especially on freestanding towers because of crane costs, labour for taking a wind generator down and putting it back up, shipping costs to the retailer or manufacturer etc.
(b) Wind generators require foundation work such as concrete anchors, good wires etc. Depending on the chosen tower design.
(c) The trees might have to be cleared, a practice against the conservation of resources. The birds killed by wind turbines could also cause concern.

Question. What is pollution? Explain how water pollution and noise pollution are harmful.
Ans i).Pollution refers to the degraded environmental quality on account of rising population of the developing countries.
ii) As a result the extinction of many resources and the wastes generated being beyond the absorptive capacity of the environment.
iii)Rising population rapidly growing industrial sector and pollution from affluence have led to degraded environmental quality by way of water contamination(70% of water in India is polluted), air pollution and noise pollution have led to an increase in the incidence of water- borne diseases and respiratory problems along with hearing loss.

Question.. .What is’ carrying capacity’?
Ans.“Carrying capacity’ implies that the resource extraction is not above the rate of regeneration of resources and the waste generated are within the assimilating capacity of the environment.

Question. What does the environment constitute?
Ans i) .Environment includes all resources-biotic and abiotic factors that influence each other. While biotic resources include all living element such as birds animals, plant Forests, fisheries etc.,.
ii) the abiotic elements include air, water, land, etc. Rocks and sunlight are all examples of abiotic elements of the environment.

Question. Explain the relevance of inter-generational equity to the definition of sustainable development .
Ans: Sustainable development implies that all future generations should have average quality of life that atleast as high as that being enjoyed by present generation .It is known as inter-generational equity. We have moral responsibility to hand over The planet earth in good order to future generation.

The four strategies for sustainable development are:
(a)se of non-conventional sources of energy. In India the use of LPG and gobar gas in rural areas and the use of CNG as fuel in urban area, wind power, solar power along with the mini hydel power plants which are environment-friendly can generate enough power to meet local demand.
(b) Traditional knowledge and practices have been more a component of the environment and not its controller. With the sudden onslaught of the western system of treatment, the traditional treatment systems like Ayurveda, Unani, Tibetan and folk systems were ignored. But now these are in gr demand again for treatment of chronic healthproblems.
(c) Biocomposting.Farmers had over a period of last five decades totally neglected the use of compost and completely switched over to chemical fertilisers, whichadversely affected the roductive land and water bodies. But now in large numbers, the farmers have again started using compost made from organic wastes of various kinds. Earthworms can convert organic matter into compost faster.
(d) Biopest Control Due to the green revolution more and more use of chemical pesticides for higher yield led to the contamination of food products like milk, meat and fish, soil, water bodies and even ground water were polluted with pesticides. But now efforts are being made to bring in better methods of pest control like the ones based on plant products like neem trees are proving quite useful.

Question. What has been the result of Ozone depletion?
Ans. Due to the depletion of ozone layer, the ultra violet radiation is coming to earth directly and causing damage to the living organisms, e.g.,
(a) It causes skin cancer in humans.
(b) It lowers the production of phytoplankton and affects other aquatic organisms.
(c) It influences the growth of terrestrial plants.

Question. Why is it that the environmental problems did not arise before?
Ans. In earlier times, the demand for environmental resources and services was much less than their supply. Due to rapid urbanisation, increased demand for goods and services has led to advanced industrialisation. This has caused pollution, which is more than the absorptive capacity of the environment. The rate at which the resources are extracted by man has been more than the rate of regeneration of the resources, there by causing serious environmental problems.

Question. Why has environment depletion led to high opportunity costs?
Ans. The nation has to pay heavily on damages to human health(fatal and nonfatal effects),effects on crops and materials, damages caused by global warming provoked by greenhouse gases, cost for correcting global warming impacts. Health of people which is affected due to increased levels of pollution also requires more investment on health facilities

Bio-pest control:
i) Biopest control is natural way of controlling that harms plants and crops.
ii) Natural enemies are used to check population of pests by using various Animals and birds.

Question. Give the Reasons for Environmental Crises.
i) Population explosion and Industrial revolution has increased the demand for environmental resources, but their supply is limited due to misuse and overuse.
Ii) The intensive and extensive extraction of both renewable and non-renewable resources has exhausted some of the vital resources.
ii) Extinction of many resources and continuous rising population has also resulted in environmental crisis.

Question. What is Carrying Capacity ?explain
i) Resources extraction should remain below the rate of resource generations.
ii) Generation of wastes should remain within the absorption capacity of the If these two conditions are not fulfilled, then environment fails to perform its vital functions of life sustenance and standard of developed world, the waste generated is beyond the absorptive capacity of the environment.

Question What has been the result of Ozone depletion?
Ans.Due to the depletion of ozone layer, the ultra violetradiation is coming to earth directly and causing damage to the living organisms,e.g.,
(a)It causes skin cancer in humans.
(b) It lowers the production of phytoplankton and affects other aquatic organisms.
(c)It influences the growth of terrestrial plants.

Question. Why has environment depletion led to high opportunity costs?
Ans.The nation has to pay heavily on damages to human health(fatal and nonfatal effects),effects on crops and materials, damages caused by global warming provoked by greenhouse gases, cost for correcting global warming impacts. Health of people which is affected due to increased levels of pollution also requires more investment on health facilities.

We hope you liked the above provided Environment And Sustainable Development Class 11 Economics Exam Questions. If you have any further questions please put them in the comments section below so that our teachers can provide you an answer. 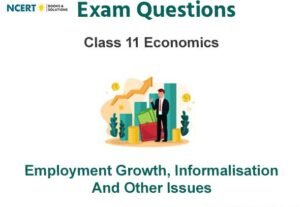