Question. Did the governor and his staff finally heave a sigh of relief ?
Answer. Evans was a shrewd man who allowed only a momentary sigh of relief to the governor and his staff. The examination was supposed to have ended peacefully, but when Stephens rechecked Evans’s cell, he was stunned to see a profusely bleeding McLeery still in the cell. He concluded that the man he had escorted to the gat was actually Evans. Measures were taken to recapture Evans with the help of the bleeding McLeery, who was later sent off a hospital for treatment. However, soon it was exposed that this ‘Bleeding McLeery’ was the real Evans. Finally, When the governor traced Evans and ordered him to be taken back to the prison with a prison officer in the official van, another conspiracy unfolded. Evans fled again, as the prison officer and the van were part of his back-up plan. His flawless plans left everyone perplexed and troubled.

Question. Why did Evans drape a blanket round his shoulder? What did Stephens think about it?
Answer. In between intervals of Stephens’ peeping into the cell, Evans was changing into the Parson’s dress to look like McLeery. So, in order to conceal his efforts to keep them in place, Evans draped a blanket round his shoulder. Stephens was misled into believing that Evans was feeling cold.

Question. In spite of strict vigilance, how did Evans’ friend manage to give the material for disguise in the cell?
Answer. Despite all vigilance, Evans’ friend disguised as McLeery, the invigilator, managed to smuggle the disguised material into the cell. He came wearing two parson’s dresses with black fronts and collars. Apart from it he also brought an extra pair of spectacles. All this was passed on to Evans when Stephens’ vigilant eyes were away from the peep-hole.

Question. Will the clues left behind on the question paper, put evans back in prison again ?
Answer. Evans escaped from the prison with the help of a clever, infallible plan. Certain clues were left behind by the shrewd fugitive which was a ‘careless’ act according to the Governor. There was a superimposed question paper with directions to the supposed plan. However, it was soon seen that all of it was fake and part of the plane to misguide the officials. But the little German the governor knew and the ‘correction slip’ did help them to track him down.

Question. Where did Evans go ?
Answer. After deceiving the police intelligently, Evans went to the hotel golden Lion located in Chipping Norton.

Question. Reflecting on the story, what did you feel about Evans’ having the last laugh ?
Answer. Evans smartly devised and executed the plan of his escape. He managed to fool everyone till the end of the story. He left fake clues to misguide the officials chasing him. Even as the Governor heaved a sigh of relief after nabbing him in the golden Lion hotel, Evans was secretly cooking and executing another path of escape. The prison officer and the van used by the governor for transferring Evans back to the prison were forged. The governor was happy that ultimately he was above to track him down using his intelligence and knowledge of German. However, Evans had planned a step ahead. With his successful escape, Evans definitely had a well earned last laugh.

Question. When Stephens comes back to the cell he jumps to a conclusion and the whole machinery blindly goes by his assumption without even checking the identity of the injured ‘McLeery’. Does this show how hasty conjectures can prevent one from the obvious? How is the criminal able to predict such negligence ?
Answer. On his return, Stephen saw McLerry bleeding profusely in the cell. Presuming the man he had escorted to the gate to be Evans and not McLeery, he raised an alarm. None of the official staff tried to verify whether that person was McLeery. As the bleeding McLeery offered to help the police to track Evans, nobody questioned how he knew the plan. Later when the governor nabbed Evans and sent him back to jail with the prison officers, he did not notice that this officer was unknown to him. It was soon unearthed that the officers were Evan’s own men who helped him escape again. Thus, it was definite that the gullible officials made speculations which resulted to their negligence. On the contrary, a plotting criminal makes a foolproof plan taking care of the intricacies and did not make hasty assumptions. He had ready back-up plans. Also, a criminal’s mind is observant enough to predict any possible negligence on the part of the officials. Evans too must have easily observed these during his stay in the prison, and planned accordingly.

Question. Will the exam now go as scheduled ?
Answer. Everything was in order for the examination to start on its scheduled time. The governor, who was still apprehensive, ordered a last minute change in plan. As a a precautionary measure, he ordered frisking the invigilator before allowing him to carry out his assigned job. The examination started as 9.25 am, ten minutes later than the scheduled time.

Question. What could the governor have done to securely bring back Evans to the prison when he caught him at the Golden Lion? Does that final act of foolishness really prove that ‘he was just another good-for-a-giggle, gullible governor, that was all’ ?
Answer. At the golden lion when the governor arrested Evans, he should have been extra cautions in sending him back to the jail. If he knew the whereabouts of Evans, he should have taken along more police officials. Also, considering the fact that Evans had successfully fooled them earlier, he should not have taken chances by sending him in a van with just a couple of police officers whom, apparently, he did not know, As a results Evans easily escaped once again. Ideally, the Governor should have escorted Evans himself. Thus this final act of foolishness really proved that ‘he was just another good-for-a-giggle, gullible gover-nor that was all’.

Question. What kind of a person was Evans?
Answer. Evans was a ‘Kleptomaniac’ and he had broken jail thrice. He was a master planner and was very sociable. He could imitate anyone like famous comedian Mike Yarwood. In the words of the Governor, he was a pleasant sort of chap with no record of violence.

Question. While we condemn the crime, we are sympathetic to the criminal. Is this the reason why prison staff often develops a soft corner for those in custody ?
Answer. ‘Crime’ and criminals’ are usually considered synonymous. However, our perception changes when we see a criminal suffering or serving his punishment. This is what happens with the prison staff. Seeing a criminal suffer in the prison, they unwittingly develop a soft corner for him in their hearts They start appreciating their mental capabilities rather than just remembering their crime. In the story, Jackson lets Evens keep his hat after knowing that he considered it to be his lucky charm. Evans knew of the emotional side of Jackson and so hit it directly through his talk about ‘lucky Charm’, and managed to fool the stern and practical officer. Even the Governor could not help noticing his intelligence when he caught him in the hotel. Thus, he was not cruel or stern with Evans, and regrettably, look him leniently.

“That’s it. Chap called Evans. Started night classes in O-level German last September. Says he’s dead keen to get some sort of academic qualification.” “Is he any good?” “He was the only one in the class, so you can say he’s had individual tuition all the time, really. Would have cost him a packet if he’d been outside.” “Well, let’s give him a chance, shall we?” “That’s jolly kind of you. What exactly’s the procedure now?” “Oh, don’t worry about that. I’ll be sending you all the forms and stuff. What’s his name, you say? Evans?” “James Roderick Evans.” It sounded rather grand. “Just one thing, Governor. He’s not a violent sort of fellow, is he? I don’t want to know his criminal record or anything like that, but – ” “No. There’s no record of violence. Quite a pleasant sort of chap, they tell me. Bit of a card, really. One of the stars at the Christmas concert. Imitations, you know the sort of thing: Mike Yarwood stuff. No, he’s just a congenital kleptomaniac, that’s all.” The Governor was tempted to add something else, but he thought better of it. He’d look after that particular side of things himself. “Presumably,” said the Secretary, “you can arrange a room where – ” “No problem. He’s in a cell on his own. If you’ve no objections, he can sit the exam in there.” “That’s fine.” “And we could easily get one of the parsons from St. Mary Mags to invigilate, if that’s – ” “Fine, yes. They seem to have a lot of parsons there, don’t they?

Question. Why did Evans decide to take the O-level exam?
(a) to keep his hat on his head
(b) to study
(c) to add to his academics
(d) to plan an escape from the prison

Question. What kind of a person was Evans?
(a) Kleptomaniac
(b) pleasing personality and a tendency to mislead
(c) stealing habit
(d) All these

Question. Who was Mc Leery?
(a) Evan’s friend
(b) policeman
(c) inspector
(d) the invigilator who had been appointed by the Governor to invigilate

Question. Why was Evans called ‘Evans the break?
(a) because of his pleasing personality
(b) because he keeps hat on his head
(c) for escaping from prison thrice
(d) All these 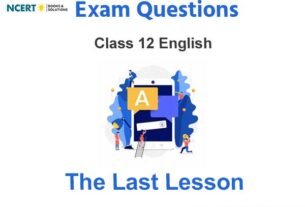