Class 9 Science students should read and understand the important questions and answers provided below for Gravitation which will help them to understand all important and difficult topics.

Question. State a condition for an object to float when placed on the surface of water.
Answer. A body will float if its density is less than that of water.

Question. Why does a nail sink in water but a piece of cork floats on it?
Answer. The density of cork is less than water whereas nail has greater density. So cork floats while nail sinks.

Question. A coin sinks when placed on the surface of water. Give reason.
Answer. The coin sinks as its density is greater than water.

Question. How is pressure related to the thrust exerted on a surface?
Answer. Pressure = Thrust/Area

Question. State Archimedes principle.
Answer. Archimedes Principle: When a body is immersed fully or partially in a fluid, it experiences an upward force that is equal to the weight of the fluid displaced by it.

Question. Give two applications of Archimedes principle.
Answer. It is used in (i) designing ships and (ii) submarines.

Question. An object of 40 N weight when immersed in water losses 10 N weight. Will the object float or sink? Why?
Answer. The object will sink as weight of object is greater than the buoyant force.

Question. Dams have broad foundation.
Answer. Greater the area, less is the pressure exerted. The broad base of dams reduce pressure on the ground.

Question. It is easier to cut an apple with sharp edge of knife.
Answer. Sharp knives have very small area on which the force acts. Hence , pressure is much more and can easily cut an apple.

Question. Relative density of an object is 1.35. Will it float or sink in water?
Answer. As relative density is greater than 1 , the object will sink.

Question. Differentiate between force and thrust.
Answer. Force can have any direction, but thrust is that force which is acting perpendicular to a surface.

Question. An object is suspended with a string which gets stretched. When the object is completely immersed in water, the extension of thread decreases. Explain why it happens.
Answer. The buoyant force exerted by a fluid is equal to the weight of fluid displaced. As a body is lowered in a fluid ,more is the fluid displaced, more is the buoyant force. This buoyant force is maximum when a body is completely immersed in a fluid , The extension of thread keeps decreasing as the net force deceases.

Question. Mark the direction of weight of the body and upthrust acting on it, in the following diagram:
Answer.

Question. An object is put one by one in three liquids having different densities. The object floats with 1/9, 2/11 and 3/7 parts of their volumes outside the liquid surface in liquids of densities d1, d2 and d3 respectively. Arrange the densities in ascending order of their magnitude.
Answer. 1/9 = 0.11; 2/11 = 0.18; = 3/7 = 0.43
There are the volume outside of liquids of densities d1, d2, d3 respectively. This means buoyant face is
maximum for d3 and minimum for d2. As buoyant force is proportional to density, d1< d2 < d3.

Question. State the principle of floatation for an object of weight W immersed in a fluid.
Answer. Archimedes Principle states when a body is immersed fully or partially in a fluid, it experiences an upward force that is equal to the weight of the fluid displaced by it.

Question. (a) State the principle on which the working of a hydrometer is based.
(b) A sharp knife is more effective than a blunt knife. Why ?
Answer. (a) Archimedes Principle : When a body is immersed fully or partially in a fluid, it experiences an upward force that is equal to the weight of the fluid displaced by it.
(b) A sharp knife has a smaller area of cross section on which force acts. Thus pressure on sharp knife is more and it is more effective than a blunt knife.
As, Pressurea 1/area

Question. Two blocks, one of iron and other of wood are immersed in water at same depth. Which one will come upward. Why?
Answer. The wood block will come up because density of wooden block is less than water, where as iron has greater density than water.

Question. Account for the statement “Camel walks easily on sand but it is difficult for a man to walk on sand though a camel is much heavier than a man”.
Answer. Camels are much heavier than men but due to their wide feet the pressure exerted on sand is much less, making it easier for them to walk on it.

Question. Differentiate between density and relative density.
Answer. Density is defined on mass per unit volume. Its unit kg/m3 .
Relative density is the ratio of density of substance to that of water. It is a unit less quantity.

Question. State Archimedes’ principle. Write two applications of this principle.
Answer. Archimedes Principle states when a body is immersed fully or partially in a fluid, it experiences an upward force that is equal to the weight of the fluid displaced by it.
Application :
1) Designing of ships, submarines
2) Lactometers

Question. A body of mass 20 kg is placed on a 2m2 area. Find the pressure exerted.
Answer.

Question. An iron ball weights 11 kg in air and 8 kg when immersed in water. Find its relative density.
Answer.

Question. What are fluids? How does upthrust exerted by a fluid on an object immersed in it vary with density of fluid?
Answer. Fluids are matter that can flow i.e. liquids and gases.
upthrust = weight of fluid displaced
= volume of body x density of fluid x acc. due to gravity.
Greater the density, greater will be the upthrust.

Question. Big trucks and tractors have broad tyres. Why?
Answer. Bus or truck have wider tyres as they carry heavier loads. To reduce pressure on the ground, the tyres are kept wider.

Question. An iron nail sinks in the water. But a ship made of iron floats on water. Why?
Answer. A body sinks if its weight is greater than the buoyant force on it like the nail. The ship has a large volume immersed in water. So , buoyant force is equal to its weight. So the ship floats.

Question. Define pressure and state its SI unit. The dimensions of a metallic cuboid are 30 cm x 20 cm x 15 cm and its mass is 30 kg. If the acceleration due to
Answer. Pressure is defined as thrust per unit area. Its unit is Pascal.

Question. A bag of cotton weighs 10 kg and occupies a volume of 2m2 . Find its density. Express this density in CGS. unit.
Answer.

Question. What is meant by buoyancy? Why does an object float or sink when placed on the surface of a liquid?
answer. Buoyancy is the upward force experienced by an object placed in a fluid.
An object floats or sinks when placed on water depending the net force. If the weight is less than buoyant force it will float, and if more then it will sink.

Question. Describe a simple activity to prove that objects of density less than that of the liquid float on it.
Answer. Take a block of wood and iron of same volume and put then in a liquid. It is seen that wood floats while iron black sinks. It we find the density of wood it is less than the liquid while that of iron is more. Thus, it is proved that objects having less density than liquid float on it.

Question. A hollow plastic ball is taken to the bottom of a trough of water and released there.
(a) What happens to the ball?
(b) Give reason for this phenomenon.
Answer. (a) When the ball is released it rises to the surface.
(b) The reason being buoyant force is greater than its weight, so there is a net force in the upward

Question. Define universal law of gravitation? Name the scientist who gave this law?
Answer. The Universal law of Gravitation states that any two bodies having mass attract each other with force directly proportional to the product of their mass and inversely proportional to the square of distance between them. The force acts along the line joining the centres of the objects.

Question. Write the equations of motion for freely falling object?
Answer. We have studied three equations of motion.
v = u + at
s = u + at
s = ut + 1/2 at2
v2 = u2 + 2as
These equations can be used to calculate the value of velocity, distance, etc by replacing ‘a’ by ‘g’. Nowequations become:
v = u + gt
s = ut + 1/2 gt2
v2 =u2 + 2gs
The value of ‘g’ is taken as positive in the case of object moving towards earth and taken as negative in the case of object is thrown in opposite direction of earth.

Question. With help of two examples define Buoyancy & Buoyant Force?
Answer. Fluid applies an upward force on a solid which is partially or fully submerged in liquid. This phenomenon is called buoyancy (Upthrust) and applied upward force is called buoyant force.
Experiment – 1:
Take a empty bottle and float it on water. If we push it down in the water partially or fully and then release, bottle suddenly jumps upward. This is because the water applies an upward force on bottle.
Experiment- 2:
Hang a rubber string. Attach a stone to the rubber string. String will elongate. Submerge the stone in water – filled bucket. The elongation in string decreases. This happens due to upward buoyant force of water.

We hope you liked the above provided Gravitation Class 9 Science Exam Questions. If you have any further questions please put them in the comments section below so that our teachers can provide you an answer. 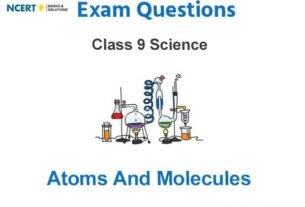