Class 11 Computer Science students should read and understand the important questions and answers provided below for Insight Into Program Execution which will help them to understand all important and difficult topics.

Question: What are the characteristics of compiler?
Answer:

Question: What are the characteristics of Interpreter?
Answer:

Question: What is cloud computing?
Answer: cloud computing is the delivery of computing services—servers, storage, databases, networking,software, analytics, intelligence and more—over the Internet (―the cloud‖) to offer faster innovation, flexible resources and economies of scale. You typically pay only for cloud services you use, helping lower your operating costs, run your infrastructure more efficiently and scale as your business needs change.
Cloud computing is a big shift from the traditional way businesses think about IT resources. Here are seven common reasons organizations are turning to cloud computing services.

Question: Describe the role of Operating System as a resource Manager.
Answer: A computer system has many resources (hardware and software), which may be require to complete a task. The commonly required resources are input/output devices, memory, file storage space, CPU etc. The operating system acts as a manager of the above resources and allocates them to specific programs and users, whenever necessary to perform a particular task. Therefore operating system is the resource manager i.e. it can manage the resource of a computer system internally. The resources are processor, memory, files, and I/O devices. In simple terms, an operating system is the interface between the user and the machine.

Question: What are the advantages of parallel computing?
Answer: Parallel computing is a type of computation in which many calculations or the execution of processes are carried out simultaneously. Large problems can often be divided into smaller ones, which can then be solved at the same time. It refers to the simultaneous working of multiple processors to solve a computational problem.
Its advantages are –
(i) It saves time and the cost too.
(ii) It makes easier to solve larger or complex problems.
(iii) It provides efficient use of underlying hardware.
(iv) It can utilize the resources available remotely.

Question: What is the role of linker in a compiler?
Answer: The part of the compiler which performs the linking of libraries is called linker. In this phase,with the help of OS, all memory references are resolved and code is converted to a form whichrequires nothing else to run.that is, the code has become executable (.exe. file) now.

Question: How is interpretation done?
Answer: Unlike compiler, an interpreter doesn‘t translate the complete code in one go and hand over a full executable file to execute. Instead, an interpreter translates a single line/section of code at a time, makes its executable version and suns it immediately.

Question: How is a process different from a program?
Answer: A running program or the executing entity is called a process. So a program is a passive entity when it is stored in storage. When it is copied to memory to get executed and starts its execution then the program is known as process.

Question: What are the steps of compilation?
Answer: The compilation mainly undergoes these steps:
(i) Preprocessing
(ii) Compilation
a. Analysis
b. Synthesis
(iii) Assembly
(iv) Linking

Question: What is the role of memory manager and I/O manager of OS?
Answer: Memory management is a form of resource management applied to computer memory. The essential requirement of memory management is to provide ways to dynamically allocate portions of memory to programs at their request, and free it for reuse when no longer needed. This is critical to any advanced computer system where more than a single process might be underway at any time.

I/O Manager:One of the important jobs of an Operating System is to manage various I/O devices including mouse, keyboards, touch pad, disk drives, display adapters, USB devices, BitPrepared mapped screen, LED, Analog-to-digital converter, On/off switch, network connections, audio I/O, printers etc. An I/O system is required to take an application I/O request and send it to the physical device, then take whatever response comes back from the device and send it to the application.

I/O devices can be divided into two categories −

Question:  What are process scheduling queues?
Answer: The OS maintains all PCBs in Process Scheduling Queues. The OS maintains a separate queue for each of the process states and PCBs of all processes in the same execution state are placed in the same queue. When the state of a process is changed, its PCB is unlinked from its current queue and moved to its new state queue.
The Operating System maintains the following important process scheduling queues −

Question: How does OS manage all the running processes?
Answer: Process managements involve the execution of various tasks such as creation of processes, scheduling of processes, management of deadlock, and termination of processes. It is responsibility of operating system to manage all the running processes of the system. Operating system manages processes by performing tasks such as resource allocation and process scheduling. When a process runs on computer device memory and CPU of computer are utilized. The operating system also has to synchronize the different processes of computer system.
A process consists of set of instruction to be executed called process code. A process is also associated with some data that is to be processed. The resources that a process required for its execution is called process components. There is also a state that is associated with a process at a particular instant of time called process state. Similar to these concepts, there are number of concepts associated with the process management function of an operating system. Some of those concepts are given as following.

Question: How is private cloud different from public cloud?
Answer: Public cloud: Public clouds are owned and operated by a third-party cloud service providers,which deliver their computing resources like servers and storage over the Internet. Microsoft Azure is an example of a public cloud. With a public cloud, all hardware, software and other supporting infrastructure is owned and managed by the cloud provider. You access these services and manage your account using a web browser.
Private cloud: A private cloud refers to cloud computing resources used exclusively by a single business or organization. A private cloud can be physically located on the company‘s on-site datacenter. Some companies also pay third-party service providers to host their private cloud. A private cloud is one in which the services and infrastructure are maintained on a private network.

Question: How is parallel computing different from serial computing?
Answer:  Serial Computing: A processing in which one task is completed at a time and all the tasks are run by the processor in a sequence. In real time example, people standing in a queue and waiting for a railway ticket. In this case, one person can get a ticket at a time. Suppose there are two queues of people and one cashier is handling both the queues then one person can get a ticket at a time from both queues. Similarly, processor get lists of tasks and each task is completed at a time and all other tasks wait till the first one completes. This type of processing is also known as sequential processing .
Parallel Computing: A type of processing in which multiple tasks are completed at a time by different processors. Note that in parallel processing there is more than one processor involved.In real time example, there are multiple queues of people standing to get railway tickets. In this case, each queue is handled by multiple people, so multiple people will get tickets at a time.Similarly, in the operating system, there are multiple queues of tasks and multiple tasks arecompleted by different processors at a time.

Question: What are the advantages of parallel computing?
Answer:  Parallel computing is a type of computation in which many calculations or the execution of processes are carried out simultaneously. Large problems can often be divided into smaller ones, which can then be solved at the same time. It refers to the simultaneous working of multiple processors to solve a computational problem.
Its advantages are –
(i) It saves time and the cost too.
(ii) It makes easier to solve larger or complex problems.
Prepared By: Sanjeev Bhadauria & Neha Tyagi
(iii) It provides efficient use of underlying hardware.
(iv) It can utilize the resources available remotely.

Question: What is parallel computing?
Answer:  Parallel computing is a type of computation in which many calculations or the execution of processes are carried out simultaneously. Large problems can often be divided into smaller ones, which can then be solved at the same time. It refers to the simultaneous working of multiple processors to solve a computational problem.

Pointer – It is a stack pointer which is required to be saved when the process is switched from one state to another to retain the current position of the process.

Process state – It stores the respective state of the process.

Process number – Every process is assigned with a unique id known as process ID or PID which stores the process identifier.

Program counter – It stores the counter which contains the address of the next instruction that is to be executed for the process.

Register – These are the CPU registers which includes: accumulator, base, registers and general purpose registers.

Memory limits – This field contains the information about memory management system used by operating system. This may include the page tables, segment tables etc.

We hope you liked the above provided Insight Into Program Execution Class 11 Computer Science Exam Questions. If you have any further questions please put them in the comments section below so that our teachers can provide you an answer. 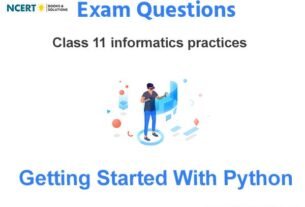