Class 9 Science Exam Questions Is Matter Around Us Pure

Question. Classify each of the following as a homogeneous or heterogeneous mixture. soda water, wood, air, soil, vinegar, filtered tea.

Question. How would you confirm that a colourless liquid given to you is pure water?

Question. Which of the following methods would you use to separate cream from milk?
(a) fractional distillation
(b) distillation
(c) centrifugation
(d) filtration

Question. Which of the following are chemical changes?
(a) Growth of a plant
(b) Rusting of iron
(c) Mixing of iron filings and sand
(d) Cooking of food
(e) Digestion of food
(f) Freezing of water
(g) Burning of a candle.

Question. Which of the following solution scatter light?
(a) colloidal solution
(b) suspension
(c) both
(d) none

Question. What is meant by a substance?
Answer. Substance can be defined as that kind of matter where constituent particles cannot be separated from each other by any physical process since they are all similar in chemical properties.

Question. What is a mixture? What are its various types?
Answer. A mixture is constituted by more than one substance (element/or compound) mixed in any proportion. They are of two types:
(a) Homogenous mixture
(b) Heterogeneous mixture

Question. What is a solution? What are the properties of solution?
Answer. A solution is a homogenous mixture of two or more substance. The various properties of solution are: –
(a) It is a homogenous mixture.
(b) The particles of a solution are smaller than 1nm and hence cannot be seen by naked eyes.
(c) It does not scatter the beam of light passing through it.
(d) The component of solution cannot be separated from each other by the process of filtration.

Question. What is centrifugation? Where it is used?
Answer. Centrifugation is a technique used for separation of constituents of mixture and is based upon the principle that denser particles stay at bottom and lighter particles stays at the top when spun rapidly. It is used separate cream from milk.

Question. List the points of differences between homogeneous and heterogeneous mixtures.
Answer.

Question. How are sol, solution and suspension different from each other?
Answer.

Question. Which separation techniques will you apply for the separation of the following?
(a) Sodium chloride from its solution in water.
(b) Ammonium chloride from a mixture containing sodium chloride and ammonium chloride.
(c) Small pieces of metal in the engine oil of a car.
(d) Different pigments from an extract of flower petals.
(e) Butter from curd.
(f) Oil from water.
(g) Tea leaves from tea.
(h) Iron pins from sand.
(i) Wheat grains from husk.
(j) Fine mud particles suspended in water.
Answer. (a) Evaporation method
(b) Sublimation method
(c) by heating and then after filtration
(d) by Chromatography
(e) by method of centrifugation
(f) by using separating funnel
(g) by filtration method using strainer
(h) with the help of a magnet
(i) by winnowing
(j) by centrifugation

Question. Write the steps you would use for making tea. Use the words solution, solvent, solute, dissolve, soluble, insoluble, filtrate and residue.
Answer. Take more amount of solvent (water) in a pan and after heating it add little amount of solute (sugar) to the solvent. Solute will dissolve completely in the solvent forming true solution, then add tea leaves that are insoluble along with another soluble liquid milk. After boiling allow filtration with a sieve so the filtrate you obtain is tea while the residue has tea leaves that are thrown away.

Question. Explain the following giving examples.
(a) saturated solution
(b) pure substance
(c) colloid
(d) suspension
Answer. (a) saturated solution: It is a solution in which no more solute particles can be dissolved at a particular temperature.
(b) pure substance: Such substance that has a uniform composition i.e. has particles with identical properties is called pure substance eg sugar, salt, water, nitrogen etc.
(c) colloid: It is a kind of heterogeneous mixture/solution in which particle size is between 1nm and 1000nm. Colloids have dispersion medium and dispersed phase.eg smoke, milk, shaving cream, jelly, cheese etc.
(d) suspension: It is a kind of heterogeneous mixture in which insoluble solid particles remain suspended in the medium and dispersion particles are visible to the unaided eyes.eg muddy river water, chalk powder in water, dust storm, sand in water etc.

Question. Write a method to separate different gases from air.
Answer. Air is a homogeneous mixture of various gases.
It can be separated from its various components by fractional distillation.
(a) First compress and cool the air by increasing the pressure and decreasing the temperature.
(b) We obtain the liquid air; now allow the liquid air to warm up slowly in fractional distillation column.
(c) The various gases separate from each other according to their boiling points at various heights of the fractionally column.

Question. What is a colloid? What are its various properties?
Answer. Colloids are the heterogeneous mixture of substances in which the particle size is too small and cannot be seen by naked eyes.
(1) It is a heterogeneous mixture, but appears homogenous.
(2) The size of particles is too small to be individually seen by naked eyes.
(3) They scatter beam of light passing through it and makes its path visible.
(4) The particles of colloid do not settle down when left undisturbed.

Question. Differentiate between metals and non metal based upon the various properties that they show.
Answer.

Question. What is chromatography? What are its various applications and underline the basic principle involved?
Answer. Chromatography is a technique used for separation of those components whose solubility in the same solvent is different.
Its various applications are:
(a) It is used to separate different colours in dye.
(b) It is used to separate pigments from natural colours.
(c) It is used to separate drugs from blood.
The basic principle in chromatography is the different solutes have different solubility in the same solvent. For e.g. if we take a spot of ink on a paper and dip it in water than that coloured component which is more soluble in water rises faster and the other which is less soluble remains at the bottom and hence the two component can be separated.

Question. Pragya tested the solubility of three different substances at different temperatures and collected the data as given below(results are given in the following table, as grams of substance dissolved in 100 grams of water to form a saturated solution). 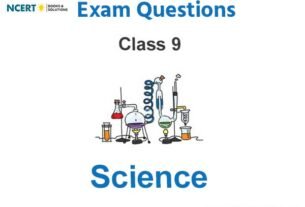 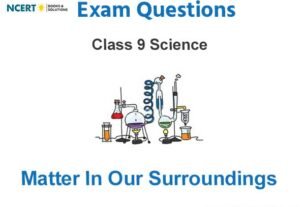