Class 9 Science students should read and understand the important questions and answers provided below for Matter In Our Surroundings which will help them to understand all important and difficult topics.

Question. If the humidity in the air increase then the rate of evaporation:
(a) decrease
(b) increase
(c) remain same
(d) both (b) and (a) depending upon the temperature

Question. If the temperature of a place is increase then evaporation:
(a) decrease
(b) increase
(c) remain same
(d) none of the above

Question. Which of the following have least inter atomic spacing?
(a) solid
(b) liquid
(c) gases
(d) plasma

Question. If you decrease the surface area and increase the temperature, then the rate of evaporation
(a) increase
(b) decrease
(c) remain same
(d) may increase or decrease depending upon other factors

Question. What is the physical state of water at:
a. 250oC
b. 100oC
Answer. b. 100oC is the boiling point of water hence at both the temperatures water is in gaseous state i.e. water vapour.

Question. Can kelvin scale have negative temperatures ?
Answer. No. because on the kelvin scale the lowest theoretical temperature which can be obtained i.e (– 273 ° C) is taken as OK.

Question. What is sublimation ?
Answer. Sublimation is a process in which a such substance, which go under sublimation are known as sublime for eg : Camphor, naphthalene balls,

Question. Why do we feel cool when we touch a piece of ice ?
Answer. We feel cool because the temperature of ice is 0°C and our body’s temperature is higher than 0°C.

Question. Explain the cooling effect of evaporation while sweating ?
Answer. When we sweat, water in it evaporates taking latent heat from our body. This cause cooling.

Question. In which unit pressure is measured ?
Answer. Pascal

Question. Why we should not wear warm clothes in summer?
Or
Why it is recommended to wear cotton clothes in summer ?
Answer. Cotton absorbs water and thus sweats very fast so sweat comes outside clothes in contact with atmosphere. Then it evaporates and gives cooling

Question. When, we use saucer to drink tea, its cools down faster as
compared to cup ? why ?
Answer. When teas is put in saucer evaporation is faster due to more surface area. This cools tea faster and makes it easier to drink.

Question. Why is ice at 273 K more effective in cooling than water at the same temperature?
Answer. While melting ice absorbs latent heat of melting from the surroundings and gets changed into water that makes the cooling effect more intense as compared to water at same temperature.

Question. When heat is being supplied to a solid, then what does the heat energy do to the particles of solid?
Answer. The heat supplied to the solid, helps the particles to overcome the forces of attraction between them and increases their kinetic energy, as a result of which particle break free the forces of attraction and changes to liquid state.

Question. Why is oxygen called as gas ? Give two reasons ?
Answer. (i) Oxygen neither has a fixed shape nor a fixed volume.
(ii) Oxygen exerts pressure due to the collisions of the molecules on the walls of the containing vessel.

Question. Liquids generally have lower density as compared to solids. But you must have observed that ice floats on water. Find out why.
Answer. Ice represents solid state of water. If we observe its 3D structure, a large empty space is found inside ice as a result it becomes less in weight as compared to water. Due to its specific structure though solid, ice floats on water.

Question. How does the water kept in an earthen pot (matka) become cool during summer?
Answer. During summers the water present on the surface of the earthen pot evaporates which causes the cooling effect. Besides earthen pot bears pores on it hence evaporation occurs continuously so is cooling.

Question. Why does our palm feel cold when we put some acetone or petrol or perfume on it?
Answer. Some liquids get quickly vapourised and they are called volatile liquids. Acetone, petrol and perfume are also volatile liquids therefore they get heat from our palm and cause cooling.

Question. Why are we able to sip hot tea or milk faster from a saucer rather than a cup?
Answer. Saucer has a bigger surface area as compared to cup. Since evaporation is a surface phenomenon, by using a saucer instead of cup we are increasing the surface are for evaporation to occur. Faster evaporation of particles of tea or milk allows cooling and taking a sip becomes easier.

Question. What type of clothes should we wear in summer?
Answer. Cotton is a good absorbant of water hence it absorbs sweat quite well and pores in the fabric expose that sweat to easy evaporation hence we should prefer wearing cotton clothes in summer.

Question. Are the three state of matter inter-convertible? How can they interconnect?

Question. Why should we wear cotton clothes in summer?
Answer. During summer, we perspire more and the particles at the surface of the liquid gain energy from the surrounding or body surface and change into vapour. Now, cotton being an absorber of water helps in absorbing the sweat and exposed it to atmosphere for easy evaporation and we feel cool.

Question. Why it is that to smell cold food, we have to go close but smell of hot food reaches us several meters away?
Answer. In hot food, the particles are at high temperature so quickly changes to vapour and hence the vapours have greater kinetic energy so travel faster and travel to far off distances. Whereas in cold food, because of temperature being low, particles do not change to vapour state and hence cannot travel faster so the smell does not reaches to a person sitting far away.

Question. Define solid, liquid and gas with example ?
Answer. Solid : Solids have fireed volume and shape in solids. In solids, particles are closely packed and they have very less spacing between them
Examples : stone, wood, brick etc .
Liquid : Liquids have fixed volume but indefinite shape. In liquids there is a weaker force of attraction and more spacing between the particles
Examples : milk, water, petrol etc.
Gas : Gases have indefinite shape and volume particles of gases have very large spacing and very weak attraction between them
Examples : air, oxygen, hydrogen etc

Question. Out of solids, liquids and gases, which one has .
Answer. (a) Maximum movement of particles
(b) Maximum inter particle forces of attraction .
(c) Minimum spaces in between constituent particles.
(a) Because of large spaces between the particles of a gas, gases have maximum movement of particles.
(b) and (c) In Solids, the spaces between the constituent particles are the minimum and hence the forces of attraction are the strongest.

Question. What is evaporation? What are the factors affecting it?
Answer. Evaporation is the process by which water (liquid) changes to vapours at any temperature below its boiling point.
Factor on which evaporation depends:
(a) Surface area
(b) Humidity
(c) Wind speed
(d) Temperature

Question. (a) Tabulate the differences in the characteristics of states of matter.
(b) Comment upon the following: rigidity, compressibility, fluidity, filling a gas container, shape, kinetic energy and density.
Answer. (a)

(b) Rigidity→ It is the property of matter to maintain its shape even if external forces work and the solids show this property.
Compressibility → It is the property of matter to allow compression under high pressure and the gases show this property.
Fluidity → It is the property of a substance to easily flow and allow change in its shape under external forces and this property is exhibited by both liquids and gases.
Filling a gas container → Gases can be compressed easily hence they can be filled within a vessel at high pressure. This property of gases allows their convenient filling into a small container or cylinder and that also in a large volume. It also allows their easy transport from one place to the other eg CNG.
Shape→ According to the type of matter shape differs depending upon location of particles like Solids have definite shape while Liquids acquire the shape of their container and gases as such don’t have any shape.
Kinetic energy → It is the kind of energy present in an object when it is under motion as the particles of that object/matter are continuously moving therefore matter has kinetic energy. However greater is the movement more will be the kinetic energy and vice a versa i.e. solid < liquid < gas Density → Mass per unit volume of a substance/matter is known as its density i.e.
density = mass/volume.

Question. Name A,B,C,D,E and F in the following diagram showing change in its state.

Question. Compare the properties of solids, liquids and gases ?
Answer.

Question. Comment upon the following : Rigidity, Compressibility, fluidity, Density, shape and volume
Answer. Compressibility : It means tendency to decrease volume when some outside force is applied. Spacing between particles of gases can be decreased so gases have high compressibility. But spacing between particles of solid or liquid can not be decreased, so they cannot be compressed.
Applications of compressed Gas –
– Compressed helium gas is filled in air balloons.
– Compressed natural gas (CNG) is filled in cylinders which are used for cooking.
Rigidity – It is the property of a substance to resist any deformation like change in shape, being compressed etc. Solids have high rigidity, liquids have less rigidity and gases have no rigidity.
Fluidity
– Fluids are substances which can flow
– Liquids and gases have fluidity
– But solids do not have fluidity
Density : It means mass per unit volume
Density = Mass / Volume
Particles in solids are very closely packed So they have high density. In gases, there is plaenty of space between particles due to which density is low.
Shape and volume
Shape – Due to less attraction force between particles, particles of liquid and gas can easily move around. This they can take any shape as per the container.
Volume –
– gases have so little attraction among particles that they can easily change spacing between them selves, So they can easily change their volume.
– In liquids, attraction force is large enough So that spacing between particles does not change easily, So liquid has fireed volume and same with solids.
– Solids can change shape on applying force Liquids and gases do not need force to be applied for changing shape.
– Some solids have gas inside them, So they can be easily squeezed to change shope.

We hope you liked the above provided Matter In Our Surroundings Class 9 Science Exam Questions. If you have any further questions please put them in the comments section below so that our teachers can provide you an answer. 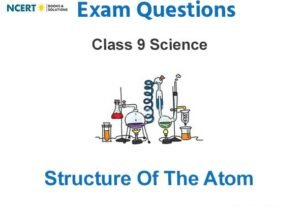