See below Biomolecules Class 11 Biology MCQ Questions, solve the questions and compare your answers with the solutions provided below.

Question. Three of the following statements about enzymes are correct and one is wrong. Which one is wrong?
(a) Enzymes require optimum pH for maximal activity.
(b) Enzymes are denatured at high temperature but in certain exceptional organisms they are effective even at temperatures 80° – 90°C.
(c) Enzymes are highly specific.
(d) Most enzymes are proteins but some are lipids.

Question. Which factor is responsible for inhibition of enzymatic process during feedback?
(a) Substrate
(b) Enzymes
(c) End product
(d) Temperature

Question. Which of the following have carbohydrate as prosthetic group?
(a) Glycoprotein
(b) Chromoprotein
(c) Lipoprotein
(d) Nucleoprotein

Question. Glycogen is a polymer of
(a) galactose
(b) glucose
(c) fructose
(d) sucrose.

Question. Which of the following biomolecules does have a phosphodiester bond?
(a) Amino acids in a polypeptide
(b) Nucleic acids in a nucleotide
(c) Fatty acids in a diglyceride
(d) Monosaccharides in a polysaccharide

Question. Which is wrong about nucleic acids?
(a) DNA is single stranded in some viruses.
(b) RNA is double stranded occasionally.
(c) Length of one helix is 45 Å in B-DNA.
(d) One turn of Z-DNA has 12 bases.

Question. Which of the following are not polymeric?
(a) Proteins
(b) Polysaccharides
(c) Lipids
(d) Nucleic acids

Question. Which of the following nucleotide sequences contains 4 pyrimidine bases?
(a) GATCAATGC
(b) GCUAGACAA
(c) UAGCGGUAA
(d) Both (b) and (c)

Question. Transition state structure of the substrate formed during an enzymatic reaction is
(a) transient and unstable
(b) permanent and stable
(c) transient but stable
(d) permanent but unstable.

Question. The essential chemical components of many coenzymes are
(a) carbohydrates
(b) vitamins
(c) proteins
(d) nucleic acids.

Question. In which one of the following enzymes, is copper necessarily associated as an activator?
(a) Carbonic anhydrase
(b) Tryptophanase
(c) Lactic dehydrogenase
(d) Tyrosinase

Question. Which of the following is a reducing sugar?
(a) Galactose
(b) Gluconic acid
(c) β-methyl galactoside
(d) Sucrose

Question. A competitive inhibitor of succinic dehydrogenase is
(a) α-ketoglutarate
(b) malate
(c) malonate
(d) oxaloacetate.

Question. Select the option which is not correct with respect to enzyme action.
(a) Substrate binds with enzyme at its active site.
(b) Addition of lot of succinate does not reverse the inhibition of succinic dehydrogenase by malonate.
(c) A non-competitive inhibitor binds the enzyme at a site distinct from that which binds the substrate.
(d) Malonate is a competitive inhibitor of succinic dehydrogenase.

Question. Which of the following is the least likely to be involved in stabilising the three-dimensional folding of most proteins?
(a) Hydrogen bonds
(b) Electrostatic interaction
(c) Hydrophobic interaction
(d) Ester bonds

Question. Enzymes, vitamins and hormones can be classified into a single category of biological chemicals, because all of these
(a) help in regulating metabolism
(b) are exclusively synthesized in the body of a living organism as at present
(c) are conjugated proteins
(d) enhance oxidative metabolism.

Question. Consider the following statements.
(A) Coenzyme or metal ion that is tightly bound to enzyme protein is called prosthetic group.
(B) A complete catalytic active enzyme with its bound prosthetic group is called apoenzyme.
Select the correct option.
(a) (A) is false but (B) is true.
(b) Both (A) and (B) are true.
(c) (A) is true but (B) is false.
(d) Both (A) and (B) are false.

Question. Cellulose is the major component of cell walls of
(a) Pseudomonas
(b) Saccharomyces
(c) Pythium
(d) Xanthomonas.

Question. In double helix of DNA, the two DNA strands are
(a) coiled around a common axis
(b) coiled around each other
(c) coiled differently
(d) coiled over protein sheath.

Question. Prosthetic groups differ from co-enzymes in that
(a) they require metal ions for their activity
(b) they (prosthetic groups) are tightly bound to apoenzymes
(c) their association with apoenzymes is transient
(d) they can serve as co-factors in a number of enzyme-catalyzed reactions.

Question. In RNA, thymine is replaced by
(a) adenine
(b) guanine
(c) cytosine
(d) uracil. 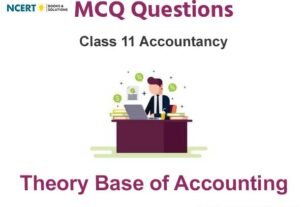 MCQs For NCERT Class 11 Chapter 2 Theory Base of Accounting