Class 12 Geography students should read and understand the important questions and answers provided below for Mineral and Energy Resources which will help them to understand all important and difficult topics.

Question. Explain any three main characteristics of mineral resources.
Ans The major characteristics of mineral resources are
(i) Their distribution over the earth’s surface is uneven i.e. some regions have rich minerals, whereas others lack behind in availability of minerals.
(ii) Minerals of good quality are less in amount and minerals of low quality are more in amount on earth.
Thus, quality and quantity of minerals have an inverse relationship.
(iii) Minerals are exhaustible, i.e. once used they can’t be used again. Minerals take long time to develop geologically and once they get exhausted, they cannot be replenished immediately at the time of need.

Question. ‘India has largest iron ore reserves in Asia’.Describe the distribution of iron ore in India.
Answer. The distribution of iron ore in India is
– Iron ore mines of India are found near the coal fields of North-Eastern plateau region which is an advantage for iron and steel industries of India.
– Only a few Indian states have about 95% of total iron ore reserves in India. These states are Odisha, Jharkhand, Karnataka,Maharashtra and Andhra Pradesh.
– Important iron ore producing regions are Sundergarh, Mayurbhanj, Jhar in Odisha, Noamundi and Gua in Poorbi and Paschimi Singbhum in Jharkhand, Sandur-Hospet region in Karnataka and Kurnool, Anantpur district in Andhra Pradesh.

Question.Give an account of the distribution of mica in India.
Answer. In India, mica is mainly found in Jharkhand, Andhra
Pradesh, Rajasthan, Karnataka. The distribution of mica in India is
– In Jharkhand, Hazaribagh plateau produces high quality of mica.
– In Andhra Pradesh, Nellore district is famous for mica production.
– A 320 km long belt from Jaipur to Bhilwara and around Udaipur produces mica in Rajasthan.
– Mysore and Hasan are important mica producers in Karnataka.

Question. Write an essay on hydel power in India.
Answer. Hydel power is one of the important renewable sources of energy. Here electricity is generated by using potential energy of water. It is more sustained, eco-friendly and cheaper energy after initial cost is taken care of. India has one of the world’s largest potential for hydroelectric power. Its potential is around 84,000 MW.
The Brahmaputra basin has the largest possible capacity of hydro power in India followed by Indus and Ganges basin. First hydroelectric power plants were set up in
Darjeeling (West Bengal) and Shivasamudram (Karnataka) in 1897 and 1902, respectively. States like Karnataka, Himachal Pradesh, Punjab, Uttarakhand, Tamil Nadu, Uttar Pradesh, Odisha, etc are the major producers of hydropower generation in India.
The National Hydroelectric Power Corporation (NHPC) is responsible for planning and promoting efficient development of hydroelectric power in the country.

Question. Describe the uneven distribution of mineral and energy resources in India by giving suitable examples.
Answer. India is a rich country in terms of minerals. However, there is uneven distribution of mineral and energy resources in country.
For example,
– Most of the metallic minerals occur in the Peninsular Plateau region in the old crystalline rocks.
– River valleys of Damodar, Sone, Mahanadi and Godavari have over 97% of coal reserves in India.
– Sedimentary basins of Assam and offshore region in  the Arabian Sea (Gujarat and Mumbai High) are famous for their crude petroleum reserves.
– The area to the East of a line joining Mangaluru and Kanpur has most of the major mineral resources of India.
– Mineral are mainly concentrated in three broad belts, namely, the North-Eastern Plateau region, the South-Western Plateau region and the North-Western Plateau region.

Question. Classify minerals into two groups on the basis of chemical and physical properties and give one example of minerals of each group. Mention any two features of the three mineral belts of India.
Answer. Minerals are classified on the basis of their physical properties and chemical properties such as
(i) Metallic Minerals Metallic minerals are those that are rich in metals. They are used to obtain a variety of metals like copper, gold, iron, etc. Bauxite, iron ore are some examples of metallic minerals. There are two types of metallic minerals i.e. ferrous and non-ferrous. Ferrous minerals include iron,manganese etc. Non-ferrous minerals include copper, bauxite etc.
(ii) Non-metallic Minerals Non-metallic minerals are those that do not have metal components. Nonmetallic minerals are mica, limestone, graphite etc.
Features of the three mineral belts are
(i) North-Eastern Plateau Region
– It covers Chhotanagpur in Jharkhand, Odisha Plateau, West Bengal and parts of Chhattisgarh.
– It contains minerals such as Iron-ore, coal, manganese, bauxite and mica.
(ii) South-Western Plateau Region
– It extends over Karnataka, Goa, Tamil Nadu uplands and Kerala.
– It is rich in ferrous minerals and iron-ore, manganese and limestone. It also contains Neyveli lignite coal.
(iii) North-Western Region
– It extends along Aravalli in Rajasthan and parts of Gujarat.
– Minerals are associated with Dharwar system of rocks. Minerals found here include copper, zinc, sandstone, granite and marble.

Question. Nuclear energy is replacing the conventional sources in India. Do you think it as a viable source of energy in future keeping in view the availability of nuclear minerals in India.
Answer. Nuclear energy is replacing the conventional sources of energy in India. Nuclear power plants are being constructed to replace thermal power plant in a phase wise manner. Nuclear energy has multiple benefit over other conventional sources. Country like India, which are deficient in energy resources are promoting nuclear energy to fulfil its demand.
Yes, nuclear energy is a viable source of energy for future keeping in view the availability of nuclear minerals in India due to following reasons
– In nuclear power plant, uranium and thorium are used to generate energy. In India, uranium deposits found in the Dharwar rock system. Its main reserves are in Singhbum (Jharkhand), Udaipur, Alwar and Jhunjhunu (Rajasthan), etc.
– India has very rich deposits of the thorium in the world, which is the biggest reason for the viability of nuclear energy in India. Thorium is mainly obtained from monazite and ilmenite in the beach sands of India.
– The states which have rich monazite deposits are Kerala, Andhra Pradesh and Odisha.
Institutions such as Atomic Energy Commission and Bhabha Atomic Research Centre are working consistently to extract thorium from monazite in efficient manner, so that India’s dependence on convectional sources can be reduced.

We hope you liked the above provided Mineral and Energy Resources Class 12 Geography Exam Questions. If you have any further questions please put them in the comments section below so that our teachers can provide you an answer. 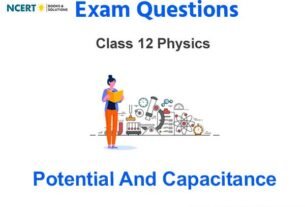