Please refer to Moving Charges And Magnetism Class 12 Physics Notes and important questions below. The Class 12 Physics Chapter wise notes have been prepared based on the latest syllabus issued for the current academic year by CBSE. Students should revise these notes and go through important Class 12 Physics examination questions given below to obtain better marks in exams

The below Class 12 Moving Charges And Magnetism notes have been designed by expert Physics teachers. These will help you a lot to understand all the important topics given in your NCERT Class 12 Physics textbook. Refer to Chapter 4 Moving Charges And Magnetism Notes below which have been designed as per the latest syllabus issued by CBSE and will be very useful for upcoming examinations to help clear your concepts and get better marks in examinations.

• Force on a Straight Conductor:
Force F on a straight conductor of length land carrying a steady current I placed in a uniform external magnetic field B

• Lorentz Force:
Force on a charge q moving with velocity v in the presence of magnetic and electric fields Band E.

• Cyclotron:
A charge q executes a circular orbit in a plane normal with frequency called the cyclotron frequency given by,

This cyclotron frequency is independent of the particle’s speed and radius.

• Biot -Savart Law:
It asserts that the magnetic field dB due to an element dl carrying a steady current I at a point P at a distance r from the current element is,

• Ampere’s Circuital Law:
For an open surface S bounded by a loop C, then the Ampere’s law states that

where I refers to the current passing through S.

• If B is directed along the tangent to every point on the perimeter them BL=μol, Where Ie is the net current enclosed by the closed circuit.
• Magnetic Field:
Magnetic field at a distance R from a long, straight wire carrying a current I is given by,

The field lines are circles concentric with the wire.

• Magnetic field B inside a long Solenoid carrying a current 1:
B =μonl
Where n is the number of turns per unit length.

Where N is the total numbers of turns and r is the average radius.

• Magnetic Moment of a Planar Loop:
Magnetic moment m of a planar loop carrying a current I, having N closely wound turns, and an area A, is

In a moving coil galvanometer, this torque is balanced by a counter torque due to a spring, yielding. kø=NI AB where f) is the equilibrium deflection and k the torsion constant of the spring.

• Magnetic Moment in an Electron:
An electron moving around the central nucleus has a magnetic moment μ1 , given by

where l is the magnitude of the angular momentum of the circulating electron about the central nucleus. 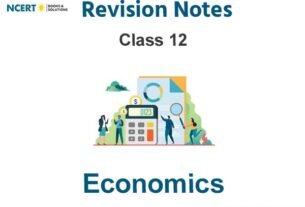 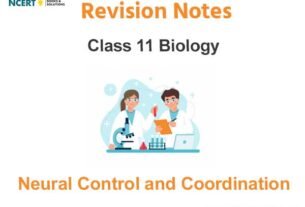