Class 9 Science students should read and understand the important questions and answers provided below for Structure Of The Atom which will help them to understand all important and difficult topics.

Question. Atomic Number of an element is equal to:
(a) Number of Protons
(b) Number of electrons
(c) Number of neutrons
(d) Both a) and b)

Question. What are canal rays?

Question. If an atom contains one electron and one proton, will it carry any charge or not?.

Question. Name the three sub-atomic particles of an atom.

For the following statements, write T for True and F for False.

Question. J.J. Thomson proposed that the nucleus of an atom contains only nucleons.

Question. A neutron is formed by an electron and a proton combining together. Therefore, it is neutral.

Question. The mass of an electron is about 12000 times that of proton.

Question. An isotope of iodine is used for making tincture iodine, which is used as a medicine. Put tick (ü) against correct choice and cross (×) against wrong choice in questions 15, 16 and 17

Question. Draw a sketch of Bohr’s model of an atom with three shells.
Answer.

Question. Helium atom has an atomic mass of 4 u and two protons in its nucleus. How many neutrons does it have?
Answer. The number of neutrons present in a helium atom
= atomic mass – no. of protons
= 4-2 = 2

Question. What are the limitations of J.J. Thomson’s model of the atom?
Answer. Main limitation to the J.J. Thomson’s atomic model was that it didn’t explain the arrangement of electrons in an atom

Question. If Z = 3, what would be the valency of the element? Also, name the element.
Answer. When Z = 3, so that element has 3 electrons in its shells distributed as = 2,1.
Its valency is 1 because it can easily give away its outermost single electron and the element is Lithium(Li).

Question. Explain the formation of Al3+ ion and why is it formed?
Answer. Because Al has atomic number of 13, its electronic configuration is 2, 8, 3 so in order that it becomes stable, it should have 8 electrons in its lose 3e– from its outermost shell and as result it has 8 e- in the outermost shell and forms Al3+ ion

Question. Describe Bohr’s model of the atom.
Answer. To remove the drawbacks of Rutherford’s atomic model and to explain structure of atom in detail Neils Bohr in 1912 proposed a model of atom. The special features of Bohr’s model are given below:
i) An electron revolves in the orbit of atom with well-defined energy.
ii) Energy of orbits increases from inner shell to the outer shells i.e. energy for orbit nearest the nucleus is lowest.
iii) If energy is supplied then electron moves from lower orbit ot the higher orbit and if an electron jumps from higher orbit (energy level) to the lower orbit (energy level) then energy is radiated as electromagnetic waves.
iv) Each orbit or shell represents an energy level. Such orbits are represented as K,L,M,N,O……….. and named from centre to outwards.
v) The shell or orbits are associated with certain amount of energy and energy of orbits/shells increases from inward to outwards.eg K<L<M<N<O…………

Question. Compare all the proposed models of an atom given in this chapter.
Answer. There are total three atomic models each of which tried to explain the atomic structure in a better way. Following table compares the specific characteristics of the models:

Question. Explain with examples
(i) Atomic number,
(ii) Mass number,
(iii) Isotopes and
(iv) Isobars.
Give any two uses of isotopes.
Answer. i) Atomic number = It is the number of protons present inside nucleus of the atom. It is represented as Z. Forge: for hydrogen Z= 1, because in hydrogen atom the number of protons is 1.
ii) Mass number = It is the total number of protons and neutrons present inside the nucleus of an atom and is represented by A = P + Nmass of carbon is 12 u because it has 6 protons and 6 neutrons, 6 u + 6 u = 12 u.
iii) Isotopes = They are atoms of the same element and have same atomic number but different mass number/atomic mass. for example: carbon,12 C and 14 6 C
iv) Isobars = They are atoms of different elements having same mass number but different atomic number. for example, calcium, atomic number 20, and argon, atomic number 18. The number of electrons in these atoms is different, but the mass number of both these elements is 40. That is, the total number of neutrons is the same in the atoms of this pair of elements.
third orbit or M-shell will be = 2 x 32 = 18
fourth orbit or N-shell will be = 2 x 42 = 32 and so on.
(ii) The maximum number of electrons that can be accommodated in the outermost or bit is 8.
(iii) Electrons are not accommodated in a given shell, unless the inner shells are filled. That is, the shells are filled in as tep-wise manner.

We hope you liked the above provided Structure Of The Atom Class 9 Science Exam Questions. If you have any further questions please put them in the comments section below so that our teachers can provide you an answer. 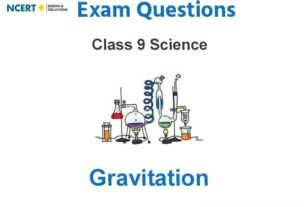