Class 12 Geography students should read and understand the important questions and answers provided below for Transport and Communication which will help them to understand all important and difficult topics.

We hope you liked the above provided Secondary Activities Class 12 Geography Exam Questions. If you have any further questions please put them in the comments section below so that our teachers can provide you an answer.

Question. Explain any three points of economic significance of ‘Trans-Siberian railways.’
Ans The Trans-Siberian railways is a major rail route of Russia. It runs from St. Petersburg in the West to Vladivostok in the East on the Pacific coast. The economic significance of these railways is
(i) It has made it possible to link Asian markets with the European markets. Now goods can be easily transported between the two continents, which provides a boost to the economies of both continents.
(ii) It connects various commercial centres in Europe and Asia and provides push to trade and commerce.For example, it runs through Ural mountains and connects Chita (agro centre) to Irkutsk (fur centre).
(iii) This railway network has improved connectivity towards its South by the connecting links such as towards Odessa (Ukraine), Ulan Bator (Mongolia), Beijing (China) etc. Thus, the economies of these regions have also integrated by the network.

Question. In what ways rail transport is better than any other means of transport?
Answer. The ways in which rail transport is better than other means of transport are
– It is a cheap mode of transport for carrying bulky goods and passengers over long distances in a country or within two continents.
– Rail transport connects the commercial centres of a country and provides a boost to the economy and industry in the country. For example, development of railways has supported mining and manufacturing in USA.
– In the densely populated regions of the world, passenger trains carry millions of people to and from their work places. Thus, it is very important for commuting purposes in these regions.
– With the construction of trans-continental railways,movement of goods and people have become easier and provid a connecting link between continents.

Question. What is cyberspace? Describe any two advantages of Internet.
Answer. Cyberspace or internet refers to the electronic digital world that is used for communicating or accessing data information over computer networks without any physical movement of the sender and the receiver. The cyberspace works within the World Wide Web (WWW). It can be accessed anywhere, e.g. in offices, at homes, in schools etc.In the last few years, it has expanded rapidly. The user base has shifted from the developed countries like USA to less developed countries such as China and India.
The advantages of internet are
(i) It expands the social and economic space of people with the help of e-mail, e-commerce, e-learning, e-governance etc.
(ii) Internet communication has connected more and more people across the world. It has made the concept of global village a reality.

Question. What are the different roles played by pack animals in transportation in different parts of the world?
Answer. Pack animals are those animals which are used as a means of transportation. Some of the roles played by pack animals are
– InWestern countries horses are used as a draught animal.
– Dogs and reindeers are used to draw sledges over snow covered area in North America, North Europe and Siberia.
– Camels are used in desert for caravan movement and bullocks carts in India.
– Mules are used in mountain areas for carrying people as well as goods.

Question. Elucidate the statement-‘‘In a well managed transport system, various modes complement each other. ’’
Answer. It is true that transport system is considered to be well managed if various modes of transport complement each other. This happens when production centres and consumption centres are well connected through transportation. Transport is the facility or service which provides movement of the goods and persons by using various modes.
Land, air, water and pipelines are important modes of transportation. These modes are used for transportation of man and materials within the country or between the two countries and continents. Trans-continental railways are constructed to facilitate long distance travel in different directions.
There are some factors like type of goods and services to be transported, costs of transport and the mode available, which determine the importance of a mode.
Every mode of transport has its own significance, like road transport is cheaper for short distance travel as compared to railway. Railways are most suited for large volume of bulky materials. Airways are preferred for long distance travel and for the rapid movement of valuable goods on a worldwide scale. Pipelines are used to carry liquids and gaseous materials without any interruption.
Hence, these modes complement each other in providing an efficient and well managed transport system.

Question. Which continent has the highest road density? Why do traffic congestions occur on road? Explain any three measures to solve the problem of traffic congestion.
Answer. North America has the highest road density. About 33% of world’s total motorable road length is present in North America. North America also accounts for the highest number of vehicles as compared to Europe.
There is a problem of chronic traffic congestion in most of the cities of the world because of the failure of the road networks in meeting the demands of traffic. In recent years, the traffic on roads has substantially increased. Peaks and troughs of traffic flow on roads can be seen at different times of the day.
The measures to solve the problem of traffic congestion are
(i) Increasing Parking Fee The parking fee for private vehicles should be increased. It will discourage them in using their private vehicles. This will reduce the number of vehicles on the roads and reduce traffic congestion.
(ii) Public Transport Public transport facilities such as public bus service, metro rails, trains etc. should be improved. It will encourage people to use public transport facilities which will substantially reduce the road traffic. Public transport connectivity should be enhanced.
(iii) Expressways Highways and expressways should be constructed. These expressways and highways are wider and larger. They provide seamless connectivity to the people and also accommodate more number of vehicles. This also reduces congestion considerably.

Question. Which means of transport is extensively used for carrying water, petroleum, natural gas and other liquids? Describe the network of this means of transport in the world.
Or Name the principal mode of transportation in the world which is used for carrying liquid and gaseous materials only. Mention any four characteristics of this mode of transportation.
Or Analyse any five points of importance of ‘pipelines’ as means of transportation.
Answer. The means of transport used extensively for carrying water, petroleum, natural gas and other liquids is pipeline transport.
The characteristics and importance of pipelines are
(i) It is most convenient and efficient means of transporting liquids and gases over long distances.
(ii) Pipelines can also transport solids after converting them into slurry (wet mixture).
(iii) Its initial set up cost is high, but after that, pipelines transport liquids and gases very cheaply.
(iv) It does not require much space.
(v) Pipelines are energy efficient and environment friendly.
The regions in which pipeline network can be found are
– In New Zealand, pipelines are used to supply milk from farms to factories.
– l In USA, about 17 per cent of all freight per tonne-km is carried through pipelines.
– In many parts of the world like Europe, Russia, West Asia and India pipelines are used to connect oil wells to refineries, and to ports or domestic markets. Pipelines are expanding very fast. For example, Turkmenistan in Central Asia has extended pipelines to Iran and also to parts of China.
– The proposed Iran-India via Pakistan international oil and natural gas pipeline will be the longest in the world.

Question. ‘Trans-Canadian railway line is considered as the economic artery of Canada.’ Support the statement with suitable examples.
Or Which is the longest Trans-continental railway of North America? Describe its any four features.
Or Describe the significance of ‘Trans-Canadian Railway’.
Answer. Trans-Canadian railway line is considered as the economic artery of Canada. It is the longest Trans-continental railway line in North America. It covers a distance of 7050 km, running from Halifax in the East to Vancouver on the Pacific Coast. It is economically significant in Canada because
– It connects the important industrial cities of Montreal, Ottawa, Winnipeg and Calgary. Goods and people can be easily transported to and from these economic centres with the railways.
– It connects Quebec-Montreal industrial region with the wheat but of Prairie region. Thus, raw materials and finished products are transported with these railways.
– The line also connects the Coniferous forest region in the North to the Quebec Montreal and the Prairies. All these regions have become complementary to each other and they support economic activities.
– A loop line from Winnipeg to Thunderbay (Lake Superior) connects this rail line with one of the most important waterways in the world. This is used for exporting various products.

Question. Explain the merits and demerits of road transport in the world.
Answer. Merits of road transport are
– Economical Road transport is cheap and most economical mode of transport for short distance travel and freight movement.
– Connectivity Road transport offers the best connectivity among all the means of transport as it offers door to door services.
– Transporting Perishable Goods Perishable goods such as milk, vegetables etc. are transported by road transport.It is best suited for transporting these items.
– Trade and Commerce Road transport plays an important role in promoting trade and commerce in the country. It also promotes tourism and other economic activities.
– Flexible Road transport is flexible in nature as multiple routes can be travelled to reach a particular place.
Demerits of road transport are
– Heavy Expenditures The construction and maintenance of roads require heavy expenditures. This affects road quality.
– Traffic Road transport is severely affected by traffic and congestion. When roads are not able to cope up with the demands of the traffic, then congestion occurs.
– Not Sustainable for All Seasons During the rainy season, the unmettaled roads are severely damaged.Even the metalled roads are damaged during floods.
– Difficulty in Construction Roads are difficult to construct in various areas such as mountains. Here, specialised agencies are required to construct roads.

Question. Name the longest Trans-continental railway of the world. Describe its any four features.
Or Describe the significance of ‘Trans-Siberian’ Railway.
Ans Trans-Siberian railway is the longest Trans-continental railway of the world. The Trans-Siberian railways runs from St. Petersburg in theWest to Vladivostok the Pacific coast in the East. It is Asia’ most important route.
Features and significance of the Trans-Siberian railways are
– It connects various important commercial and industrial centres such as Moscow, Ufa, Irkustsk, Chita etc. These centres are important for the economy of the region.
– In Asia, it is the longest as well as double tracked and electrified railways. Due to this, it is possible to link Asian and European markets.
– This railway line has connecting links further Southwards. It connects Odessa in Ukraine, Baku on the Caspian Coast, Tashkent in Uzbekistan etc.
– This railway line is important for trade and commerce between the continents of Asia and Europe. It provides integration of both continents in terms of their economy and society.

We hope you liked the above provided Transport and Communication Class 12 Geography Exam Questions. If you have any further questions please put them in the comments section below so that our teachers can provide you an answer. 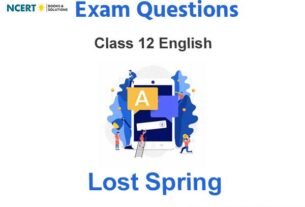